Synergy Percussion has the dual distinction of being Australia’s oldest and foremost contemporary music ensemble. A world of sound with percussion at its heart, the group celebrated 40 years of concerts, collaborations, recordings and commissions in 2014. Over four decades of huge cultural change, Synergy Percussion has remained vital and fiercely committed to defying expectations of what percussion music might aptly express. Core members Timothy Constable, Bree van Reyk and Joshua Hill are all award-winning and internationally acclaimed exponents of new music in their own right, equally at home on world-music stages, contemporary/experimental art venues, pop concerts and recital halls.

The ensembles’ expansive vision of percussion, together with the exceptionally wide musical experience of the members past and present, has allowed the group to work together with a diverse and exemplary family of artists from around the world. Collaborators include Fritz Hauser, Hossam Ramzy, Omar Faruk Tekbilek, Aly N’Diaye Rose, Trilok Gurtu, Jose Vicente, Kazue Sawai, Dave Samuels, Evelyn Glennie, Riley Lee, Taikoz, Michael Kieran Harvey, Sydney Dance Company, Meryl Tankard and Regis Lansac, Akira Isogawa, Grainger String Quartet, William Barton, and the Leigh Warren Dancers, the Sydney and Melbourne Symphony Orchestras among many others.

Well over fifty commissions of Australian and international composers has helped create an Australian percussion sonic identity, and contributed to the canon more generally. Notable commissions include Steve Reich Mallet Quartet (2009, the most significant percussion work of the composer post drumming of 1971), Anthony Pateras beauty will be amnesiac or will not be at all (2013, the most ambitious Australian concert work for percussion), Nigel Westlake Omphalo Centric Lecture (1984, statistically the most performed classical percussion ensemble piece in the world), Ross Edwardes prelude and dragonfly dance, Peter Sculthorpe Sun Song, Djilile, Gerard Brophy Book of Clouds. The group also commissions internally, and works by ensemble members have been performed internationally to high acclaim.

Synergy Percussion has a proven track record of successfully creating and executing education and outreach programs aimed at encouraging young people from all walks of life to engage with music. The group has contributed to the education programs at all major tertiary music institutions across the country, including supervising the post-graduate percussion program at the Australian National University. The ensemble has enjoyed a long-standing collaboration with Musica Viva to deliver such programs to students across Australia, the most recent being the highly successful Under Construction with composer Damian Barbeler. Members of the group also mentor young musicians through the Sydney Youth Orchestra’s Percussion program and through the young artist in residence program.

Synergy Percussion has a proven track record of successfully creating and executing education and outreach programs aimed at encouraging young people from all walks of life to engage with music. The group has contributed to the education programs at all

“the best I ever heard the piece played. Really, I’m serious. It really is. It absolutely is”
Steve Reich 2012 commenting on Synergy’s 2012 performance of “Music for 18 Musicians” 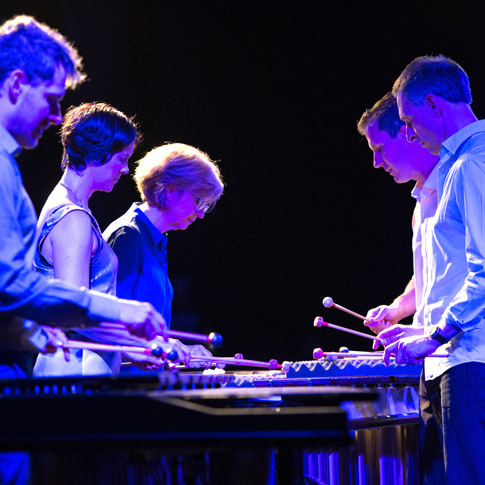